Andrew joined the RAF (VR) , arriving at the ACRC (Aircrew Reception Centre) in London on the 18th of August 1941. On the 6th of September he reported to No 11 ITW (initial Training Wing). 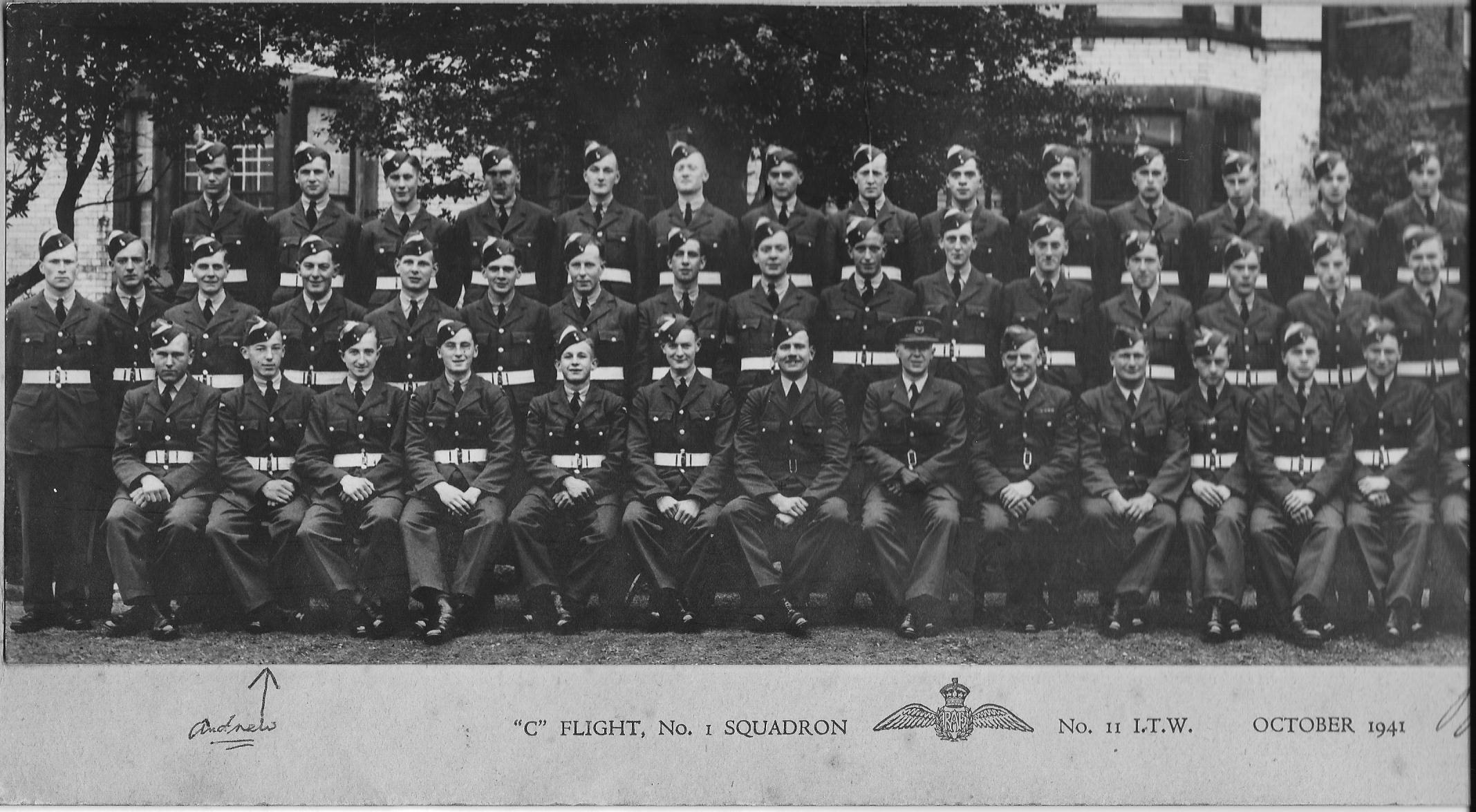 Andrew’s Initial Training was at Scarborough ITW, where he would have been subject to the normal one or two days being kitted out, getting injections and checking over by a doctor or dentist. This was followed by eight to ten weeks of Basic Training, which was more directed to making the airman into a soldier rather than an airman.

This Basic Training was initially carried out by regular RAF Discipline instructors, of Corporal or Sergeant Rank. It was a great source of unhappiness to the Discip' Staff that the recruits they were training would be the same, or higher rank than them in a relatively short time period.

After the basic training was accomplished, the recruits were subjected to a 'streaming' process, where their qualifications and more importantly their aptitudes were measured and considered. Initially, these streams were either ‘Pilot/Observer’ or 'the rest', who made up the crew's gunners and radio operators. Later on in the war these streams were divided into ‘Pilot/Bomb Aimer/Navigator’ (PBN) and 'the rest', who made up the crew's flight engineers, gunners and radio operators.

Andrew was selected as a u/t (Under Training) Pilot/Observer on the 2nd February, 1941 with the rank of LAC (Leading Aircraftman). To further cement the Board's choice, all these candidates were sent to EFTS (Elementary Flying Training School) to ensure they were fit for further training. Andrew was posted to 22 EFTS, at Teversham, Cambs, with Marshalls, on the site of what is now Cambridge Airfield; the aircraft was the DH 82 Tiger Moth. Here he took instruction on eight flights of 30 minutes each - and was confirmed as 'Pilot Material'.

Pilots were not just the flyers of the aircraft; they were its 'skipper' or 'Captain'. This meant that they were required to demonstrate not just the ability to fly, but the qualities required to be the 'leaders' of their crew and know all the crew position's tasks and functions. So a pilot learned about navigation, bombing, gunnery, radio procedures and the technical skills required to manage the aircraft systems. They were not required to use all these skills in the air, but needed the basic skills to underline the other crew's functions. To this end, the training was a multi-faceted affair, with flying at its heart.

At any time during their subsequent training, the recruits selected for training could be declared unsuitable for the stream they were being trained in and then offered places where their abilities were of more use.

Andrew was one of the student pilots to be sent to America for Training under the The Arnold Scheme. The scheme was established to train British RAF pilots in the USA during World War Two. Its name derived from US General Henry H. Arnold, Chief of the USAAF, the instigator of the scheme. It ran from June 1941 to March 1943. To this end, Andrew was posted via the Manchester ACDC (Aircrew Dispersal Centre - 27/12/41) and HM Troopship the 'Montcalm' to RAFPD (RAF Personnel Depot) at Moncton, Canada. He arrived on the 19th January 1942. 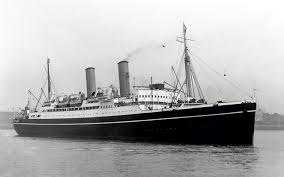 He was posted from there to Turner Field, Albany in the USA to begin his training. After three weeks there, he was posted to the Lakeland School of Aeronautics (soon to become the Lodwick School of aeronautics), Lakeland, Florida, in Feb 1942, he commenced training on the PT17 Stearman aircraft, mainly under the watchful eye of a civilian instructor, W.A. Lethio, ending with 60Hrs and 14 Mins in his logbook. It was also whilst he was here, that he met and fell for a certain Mary Molpus, of whom more later. The next stop on his travels was Cochran Field, Macon, Georgia in May '42 and the BT13A "Vultee Valiant". He ended his time there with a further 72Hrs and 50Mins in his logbook.After that he was off to Dothan, Alabama in July '42, and the AT-6A that we know as the Harvard aircraft, for Advanced Flying Training. At this stage he was also flying out of Elgin and Napier Fields. He was an average pilot, with comments from his flight commander of, "Flying O.K., but too cocky". But he persevered, and graduated as a fully trained pilot.

He also gained the interest of a couple of the local young ladies. One was Mary Molpus, the other possibly Lucille (?). Mary may have been the daughter of a Lakeland dentist. The pictures on the "Lakeland" page, which were in his personal effects, are now in my keeping. To my great sadness I did not locate Mary until a few years ago, to discover that she had been killed in a road accident shortly before I discovered her whereabouts.

He arrived back at 31 RAFPD Moncton, in Canada on the 9th September 1942 and again crossed the water to England. This time he was aboard the RMMV (Royal Mail Motor Vessel) 'Stirling Castle'. After arrival in Bournemouth at No 3 PRC (Personnel Reception Centre) he was quickly posted to No 14 (P) AFU (Pilot Advanced Flying Unit) at Ossington, Notts, where he started to fly the Airspeed Oxford as his streaming into 'Heavy' aircraft dictated. His first twin-engined "solo" was on the 21st Nov '42 in Oxford Ser No 9635. After 3 months on the Oxford he was posted to No 11 OTU (Operational Training Unit) to fly the Vickers Wellington aircraft. It was at this point he would teamed up with his crew, although two members were not allocated during training on the Wellington: the Flight Engineer and another Gunner. Steady progress meant that he went in May 1943 to 1651 HCU (Heavy Conversion Unit), at Waterbeach, Cambridge, to learn to fly the Short's Stirling bomber. He now had a full crew of six plus himself as Captain. Completing the conversion training on the 18th May, 1943, he was posted with his crew as an operational crew flying Stirling III Bombers out of Lakenheath, Suffolk. A lot has been written about the Stirling, from its ability to turn inside a Hurricane at low level, to its vulnerability when flying fully laden at it's operational ceiling of 15,000 feet.

Andrew and his crew had been posted to RAF Lakenheath with 149 (East India) Squadron. His crew were:

The first trip for Andrew and his Navigator with 149 Sqn was with Plt.Off. Laurie Blair as first pilot in OJ-M (BF531) on the 27th May '43. This Op was done to allow the 'rookie' crew (Pilot and Nav) to experience Operations before going out with their own crew. A second "Op" was on a trip to Wuppertal on the 29th May (Alex Holms, the Nav, also shows this trip in his log book). Again Plt Off Blair was first pilot. This was the first recorded 'Operation' of his tour. On the 29th of May, he and the crew received their new Aircraft, a Short & Harland built "Stirling" Mark III serial number EE872, contract No 774677/38. This aircraft was transferred to 149 Sqn on the 26th May '43 and given the Sqn letters OJ-N. Although this was not the only aircraft the Crew flew, it was still considered "theirs" by them, and treated as such. All the crew's Operations were flown in this aircraft. The crew's Operations were as follows:

Target - Gardening off Frisian Islands. Four mines successfully dropped, one hung up due to electrical problem.

It is a measure of how much pressure Bomber Command was under that a Rookie crew could undertake 9 Operations in their first month on a squadron. Losses of the Stirling aircraft were mounting steadily and in another few months they would be withdrawn from first line bombing attacks.